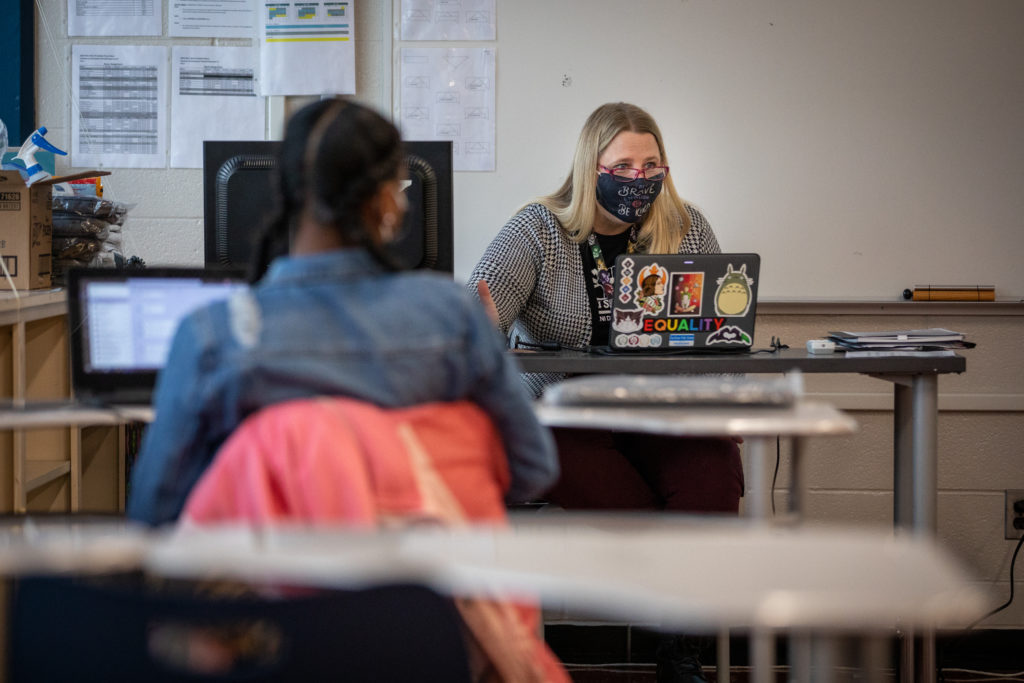 A large-scale survey of California teachers last summer confirms what has emerged as a by-product of more than two years of the pandemic: a large number of teachers describe their work as “stressful” and “exhausting” . And nearly twice as many teachers as in the past say working conditions have deteriorated.

The results of the survey of 4,632 teachers, commissioned by the California Teachers Association and the UCLA Center for the Transformation of Schools, were released Tuesday. Hart Research Associates administered the survey; all teachers are members of CTA.

The survey indicates multiple reasons for dissatisfaction, and teachers considering leaving the profession cited burnout due to stress (57%) and political attacks on teachers (40%), followed by a heavy burden of labor aggravated by staff shortages. Low pay, lack of respect from parents and lack of work-life balance also topped the list. 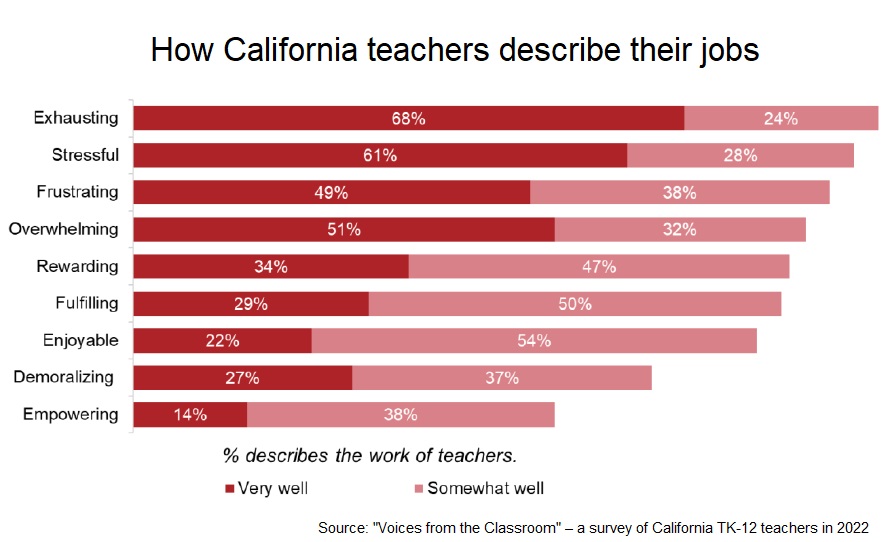 The survey found that 1 in 5 teachers say they are likely to leave the profession in the next three years, including 1 in 7 who say they will leave permanently. Another 22% say there is a 50% chance they will leave.

However, national data on recent teacher quits calls into question what the survey called California’s “retention crisis.” Survey research and review by Education Week concluded that the teacher attrition rate increased in 2021-22, but only by a few percentage points, to 7% nationally and 10% in large urban and low-income districts.

Dan Goldhaber, vice president of the American Institutes of Research, whose study of teacher turnover in Washington state also found a slight increase in attrition in 2021-22, said “the data certainly does not support the idea that the number of teachers who suggest they might leave are actually leaving.But he added, in his Washington State Analysis, “That doesn’t mean we should be careless; we should take reports of teacher burnout and dissatisfaction seriously, even if they do not lead to attrition.

The California survey paints a nuanced picture: While many teachers consider leaving teaching, most said they continue to enjoy it; more than two-thirds say they are very satisfied (39%) or moderately satisfied (29%) with their position. That leaves 32% with low satisfaction. Older and secondary teachers were more likely than younger and primary teachers to report being very satisfied. Slightly more black and Asian American teachers indicated they were likely to leave the profession than white and Latino teachers. 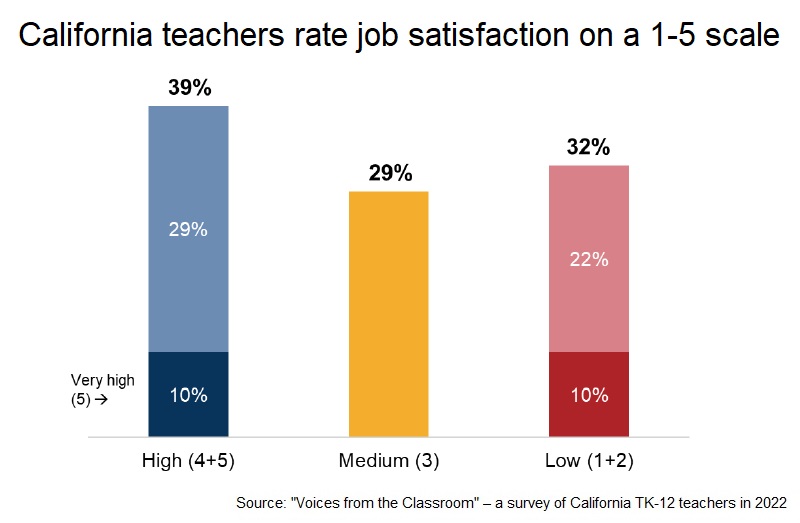 “Some teachers feel happy with their jobs and their salary structure, but it behooves us to find out why 30% say they are not,” said Kai Monet Mathews, research director of UCLA Center for School Transformation. “The changes brought about by the pandemic will have a lasting impact. Teachers are more overwhelmed than before. We need to be proactive — hear the voice of teachers and listen to their concerns.

Teachers said the main motivation for entering and staying in the profession is to help students and make a positive difference in their lives. But that turned out to be both positive and negative aspects of their work.

When asked what they enjoy most about their current job, current teachers mentioned bonding with their students (42%) and helping their students grow and develop (43%).

Yet when asked what they like least about their jobs, teachers pointed to student apathy, discipline and behavioral issues (32%). In two dozen in-depth interviews, teachers said that inadequate classroom management training and a lack of support from administrators and parents compounded behavior problems. Teachers who said they planned to leave the profession cited tougher discipline for disruptive behavior and increased salaries as two main ways to retain teachers.

The National Education Association predicted that the average teacher in California would earn $87,275 in 2020-21, the third highest salary among teachers in the country. Three-quarters of teachers surveyed reported an annual family income of more than $100,000, with 36% more than $150,000. But California is also one of the least affordable states, exacerbated by escalating housing costs in the Bay Area and Southern California.

Two dozen aspiring teachers also cited the financial burden of tuition fees and qualification tests. They expressed positive opinions about teacher residencies, internships and clinical practice, but not about the cost.

“I was and am willing to do whatever it takes to be a teacher. However, the cost of tuition compared to what teachers earn is very sad. The cost of teaching students was $10,000 and was a huge challenge for me,” said one interviewee, a 23-year-old woman.

Completing 600 hours of classroom practice to become a full-time teacher in California requires taking a semester off, Mathews said. Access to becoming a teacher is limited if you do not have a partner or family to support you during this time. Those most affected are low-income aspiring teachers of color, she said.

“It’s time to have a broad and creative conversation about compensation with the community,” Mathews said, and consider benefits that don’t necessarily come in the form of a monthly paycheck, like the providing housing allowances, student loan coverage, paid universal residence halls for teachers — “a GI bill for teachers,” Mathews said. “Teachers must be seen as part of the social fabric, compensated and supported.”

The challenge of achieving full inclusion

The success of teacher retention and recruitment in an increasingly diverse state will depend on creating school environments that support diversity. The survey indicates that teachers see a need for significant improvement, although this depends on subtle differences in perception.

Over 80% of teachers said they felt comfortable being “authentic” themselves in their schools and that their schools supported different cultures; 77% said they felt a sense of belonging at school. But they were divided on whether they supported these views “strongly” or “somewhat”. Nearly two-thirds of teachers said their school leadership demonstrated a genuine commitment to cultivating diversity. But only 32% said they strongly believed their leaders were fully engaged.

The report indicates that there are significant differences between whether white teachers and teachers of color strongly feel a sense of belonging to their school. But the data shows identical proportions — 41% — of white and Latino teachers think that way. However, the data also shows that black and Asian teachers feel much less comfortable being themselves in school. According to former teachers of color, a key difference was working in a school where some or all of the population came from a background similar to their own.

Employees of the Water Department present their career paths