As accountants pull the cord and bail out their companies en masse for the greener grass of industry, government and even the blissful calm of unemployment so they can figure out what they really want to do with their life, there is a lot of talk about it with abandoned workloads being dumped on the fools loyal grunts that remain. Associates do high-level work, seniors unwittingly pose as managers with no manager’s salary, blah blah, none of this is new to any of you. Concerned about the effect the mass resignation will have on the already precarious audit quality, the PCAOB is carefully monitoring the attrition situation to ensure that the 22-year-olds on Adderall are performing the proper procedures. Some even fear that if the problem with public accountants worsens, the very reliability of the financial statements will be threatened. It wasn’t like it wasn’t until everyone started quitting their jobs.

None of this is your problem as a public accountant. Sorry to have to say this, but you’re not responsible for your colleagues being left behind if you leave. What is the saying, “poor planning on your part does not constitute an emergency for me.” Companies have failed to adequately prepare for a mass exodus and have integrated talent into their business model, it’s not your fault. And if all of Western capitalism collapses because you don’t get the raise you’re entitled to, screw them.

Speaking of fucking them, if you’re sick of waiting for companies to give away more than pizza nights and -5% raises (inflation and everyone else) Business Insider released data this week that shows the best way to get a raise is to leave. That’s it. Don’t sit around waiting for the company to do the right thing, don’t think that if you hold out for another season things will change, don’t convince yourself that things aren’t so bad because at least you make pay and don’t have to tend the bar or dig graves. The only strategy to get what you’re worth is to leave.

Insider Coin is behind an aggressive paywall, so do what you have to do to access it, but the main takeaway is that leaving has a fee. Rather, the takeaway is that if you stay, you’re a sucker. 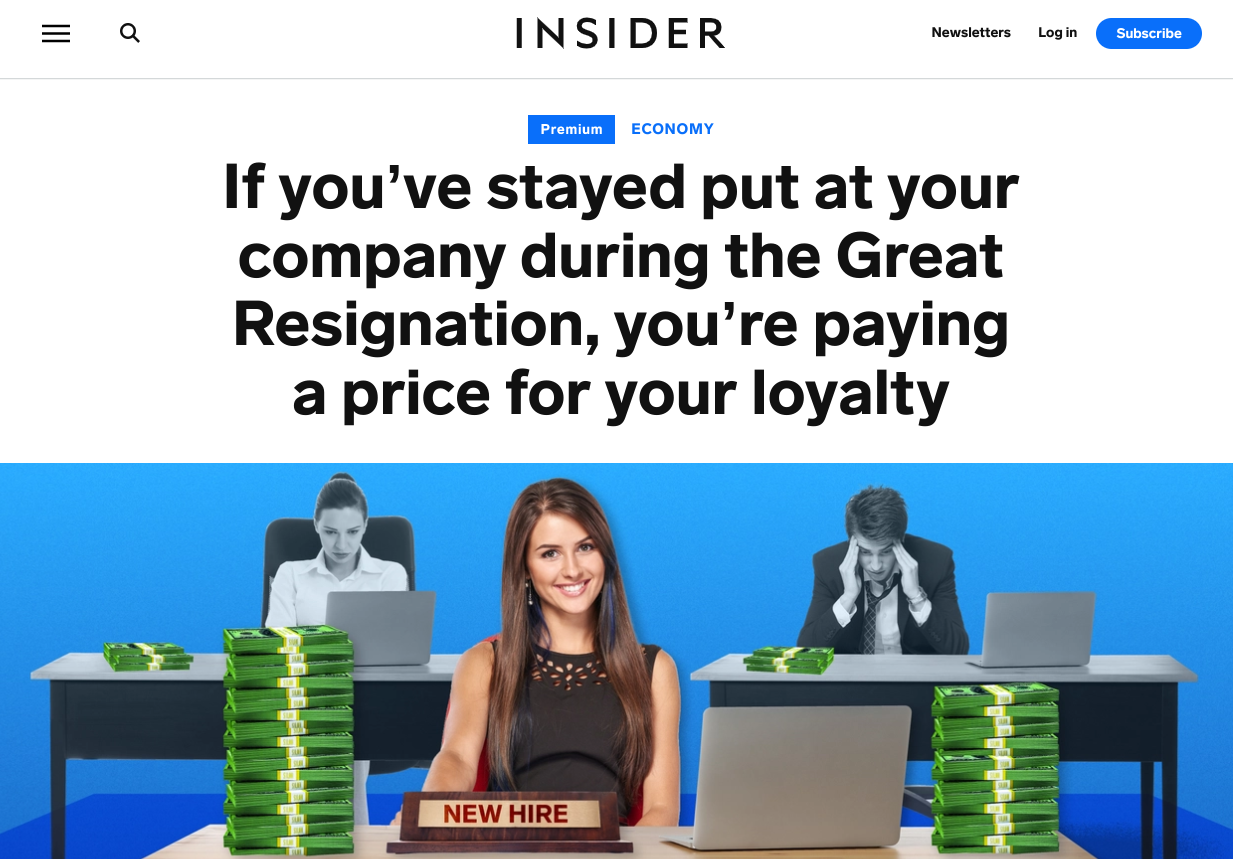 Data from the Atlanta Fed is included and confirms that the exiters are the top performers in this market. With rampant inflation and a looming recession, there may never have been better sunshine for making hay.

In April, wages for job changers rose 5.6% from a year earlier, compared to a 4.2% increase for those who stay in their jobs. That 1.4 percentage point difference is the biggest since the dotcom bubble of 2001. It’s so big, in fact, that changing employers makes all the difference in whether your salary has kept up with inflation. In the first quarter of this year, the Fed’s preferred gauge for prices rose 5.2%.

Maybe that number isn’t motivating enough for you to leave your company in the dust, in which case you should scroll through r/accounting and record all the people who left the Big 4 for pay raises ranging from 40 to 50% (obs. YMMV). Do the math on your real hourly rate and you’ll probably find that you’re mathematically better off digging graves. Note: Gravediggers make $30,000 a year, but they get a time and a half, which you probably won’t get, and you’ll be ripped out of all the physical work you definitely aren’t.

So go. Hell, go to another Big 4 company. Find a friend to share a referral bonus with and you’ll both be better off. Miserable, of course, but miserable with more money in their pockets. Go ahead and make that hay, you deserve it.*

*Going Concern is not responsible if you jump ship and are miserable wherever you are. Maybe you are just a miserable person. Go unpack that in therapy.

Do you have something to add to this story? Let us know by email, Twitter, or text/call the phone line at 202-505-8885. As always, all advice is anonymous.

Why is turnover so high among technology leaders?

8 Tech Careers You Can Pursue With a Communications Degree