[Editor’s note: ‘This Has Always Been a War’ features essays about Lori Fox’s work and family life — highlighting the difficulty of the banal, and the banality of the difficult. After living through a childhood marked by trauma, Fox must make their way through adulthood without the family connections they’ve left behind in order to find peace and safety and freedom — in a world that is often openly hostile to Fox’s gender, and queerness, and where it is difficult to make the fruits of labour align with the rising costs of rent. The following excerpt comes from ‘Other People’s Houses,’ an essay that explores Fox’s search for stable work and stable housing in the same place, at the same time.]

Announcements, events and more from Tyee and selected partners

Two Tyee writers are finalists for a climate cover award

Michelle Gamage and Sean Holman are nominated for the Canadian Association of Journalists’ Environmental and Climate Change Award.

“We can’t just plug it all in and act like there’s no ramifications.”

Scoop! Two other reporters in the running for the CAJ prize

Moira Wyton and Amanda Follett Hosgood are finalists for news “of regional or national significance”.

I couldn’t find a job or pay my sublet in Montreal, so I took a job on Salt Spring Island as a farmhand. I got back in the car with my things and my dog, thinking once again that I was heading, if not for something better, at least for something stable. In my head, I thought the warmer climate would make things a little easier. At least, I told myself, if things didn’t work out, I could sleep in the car or camp much longer than I could in the East or the North.

I drove through the northern United States in March. There was wind and rain. There was snow. There was ice and impossible mountain passes. I was supposed to start the farm on April 1st and, finding myself trapped in the Bitterroot Pass of Montana in a terrible ice storm, sleeping in a tent, I waited for a break in the weather before driving from Butte, Montana, to Vancouver, BC, about 1,000 miles straight, with nothing but ramen, coffee at the truck stop, a pack of Marlboro reds and a beer every 300 miles.

I was 31 when I arrived on Salt Spring Island. Although the farmers were kind and the food was excellent – green vegetables and fresh fruit, after being in the North for so many years seemed a delight – there was no running water or electricity in the hut which was furnished to me. There was an old moldy and damp futon mattress. The wood stove, badly installed, gave off dangerous smoke. The work was exhausting. One week I did nothing but pull weeds from a field of blueberries in which nests of hornets and mold had taken root, pulling out heaps and heaps and heaps of what locals call it “rat grass.” I woke up in the morning with my hands so stiff and swollen that I couldn’t make a fist. My friends tried to cure them by wrapping them in plantain and mullein overnight.

During my first week on the farm, anticipating how little my allowance of $500 per month would bring me, I started a side business. I had always been resourceful and gifted with my hands, traits that my time in the bush and working in construction had only honed, so I presented myself as a handyman for $20 an hour.

Within a week I had more customers than I could handle and had to take the ad down. Soon I was working eight to ten hours a day on the farm and another three to five hours of manual labor in the evenings – building fences, splitting wood, moving furniture. All the while, I continued to periodically write short stories and essays for Vice online. I became thin, nervous. I was always hungry, but when I came home at night and lay down, tired to the bone, with sunburned and peeling lips, I was often too exhausted to cook, and even eat less. More than once I’ve eaten fresh, raw duck eggs just for the calories.

It was during this time, however, as I was roaming the island, that I noticed something strange. There were all these big, beautiful houses—so many windows! So many bathrooms! What gardens! — but only two, three, four people live there.

Most people I knew worked on farms and rarely got paid full price for their work. Instead, they were offered room and board and a stipend, which meant that if you wanted to quit, you usually had to leave the island, as there was nowhere else to live that the poor could afford. There were homeowners’ associations and community groups that tightly controlled what kind of housing could be built, and where, and how many people could live in it, in order to maintain the “character” of the island – code, of course, to keep the trash out. There were secret, quasi-legal accommodations that, when they came on the market, were only advertised by word of mouth. There were countless homes that no one actually lived in, instead hosting a rotating cast of strangers paying a premium for their luxury accommodations through Airbnb.

Basically, if you wanted to live in Salt Spring and you weren’t rich, you had to work for someone who was. They would give you accommodation so that they could earn money with you, either through your direct labor or by renting you something that elsewhere would not be deemed suitable for living. You had no accommodation. live unless you live to care for other people’s property, paid for other people’s mortgages. It was an island of the rich and their servants.

In June, I saw the problems I was in; at the end of September, at the end of the growing season, my contract with the farm was ending, at which point they asked me to either move out or start paying for housing. Locals had told me that work was scarce in winter – tourists had all left, many shops were closed – so it would become even more difficult to earn a living. My meager allowance barely covered my car insurance and groceries each month, so if I wanted to save money, I would have to continue to freelance and maintain the handyman business, which combined with working I was already doing, meant maintaining an absolutely brutal pace. As cafes closed in the fall and winter, I had fewer places to work; the writing would become more difficult and the ferry to the island was expensive.

If I stayed, I would probably be trapped until spring, unable to afford to leave.

I knew there had been some good burns the previous year in the interior of British Columbia, where wildfires had brought in morels. The price, I knew, was low that year, but I was a seasoned picker; working alone, I could manage.

A younger, less cautious me might have waited, because I loved the weather and loved the people, but I saw it coming: cold, wet winter alone in the cabin or in my car, in both cases without electricity or water or internet. 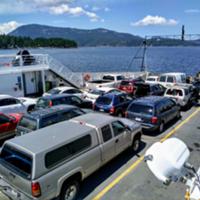 So I left. Not because I wanted to, but because it was the only way to survive in the long run. I left the farm, left the island, with its smooth-skinned strawberry trees and blackberries growing in fist-sized clusters and its tiny Sitka deer, tame like chickens, and returned to the bush.

And there I was a second time. Homeless.

I worked on the burns, first the Elephant Hill fire and then, when it dried up, the Whiteswan fire near Canal Flats in the Kootenays. At the end of the season I worked on farms in the Okanagan picking fruit and then in Salmon Arm picking thorny lodgepole pine cones, which would be used to start seedlings for tree planters . Often paid in cash, I saved my money in a coffee tin hidden in the back of the car – paperclip-bound bills in a President’s Choice dark roast coffee tin.

When the season ended and it got cold, I turned the car north and drove up the highway, to the last place I had been safe or stable, the last place where I felt like home: Whitehorse.

We are looking for a freelance news writer for the evening shifts!

I told a new friend about my sexuality