In February 2009, Charla Nash was viciously mutilated by Travis the chimpanzee, leaving her clinging to life and in need of a full face transplant. 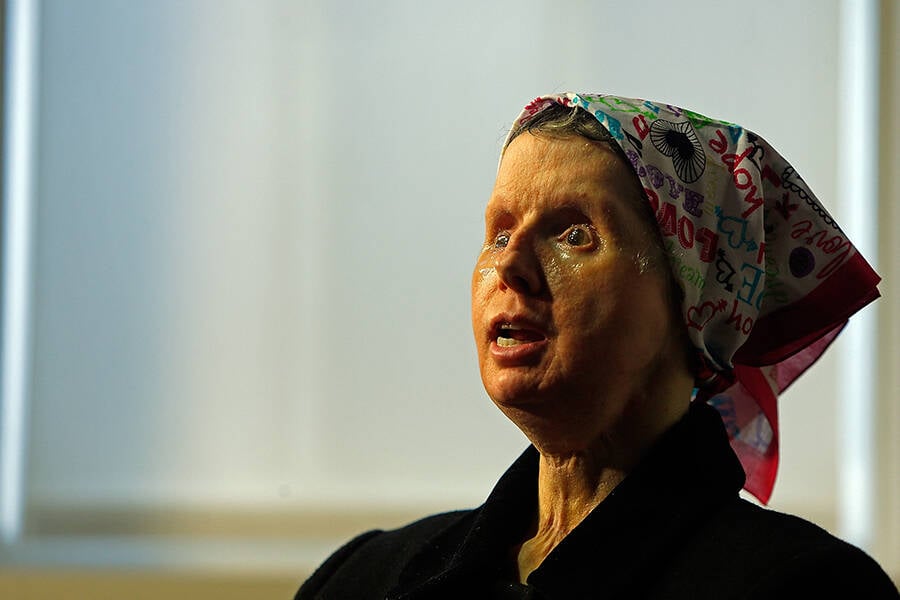 On February 16, 2009, Charla Nash visited the home of her longtime friend, Sandra Herold, as she had done many times before. Unfortunately, the visit was anything but normal.

Sandra and her husband, Jerome Herold, had adopted a young chimpanzee named Travis more than a decade earlier. Although he had grown up in the house alongside humans since he was only three days old and was a beloved member of the community, he had had erratic behavior outbursts for several years.

Tragically, the chimpanzee – who had dressed up, done chores around the house and kept Sandra company after her husband died – viciously attacked Charla Nash that morning, leaving her permanently disfigured.

Sandra Herold had recently suffered a pair of tragedies. In September 2000, the Herolds’ only child, Suzan, died after her car collided with a tree along a deserted Virginia highway.

Fortunately, according to New York Magazine, Suzan’s granddaughter survived unscathed, but Sandra Herold sank into depression and struggled to maintain a relationship with her grandchildren.

The second tragedy came in April 2005, when Herold’s husband died of stomach cancer after a week-long hospital stay. The sudden loss not only sent her into a severe depression, but also their pet chimp, Travis.

“We are both lost without him and miss him dearly. Travis always waits for him, especially at supper time because by then they both had a glass of wine with their supper,” wrote Herold in a letter to the owner of a chimpanzee sanctuary in Florida, nearly a year after Jerry’s death.

“I live alone with Travis, we eat and sleep together but I’m worried that if something happens to me as suddenly as my husband would happen to Travis, so I have to try to do something before it happens.”

Throughout this period, the isolation of Sandra Herold and the unfortunate circumstances of Charla Nash’s life had caused the two friends to separate. 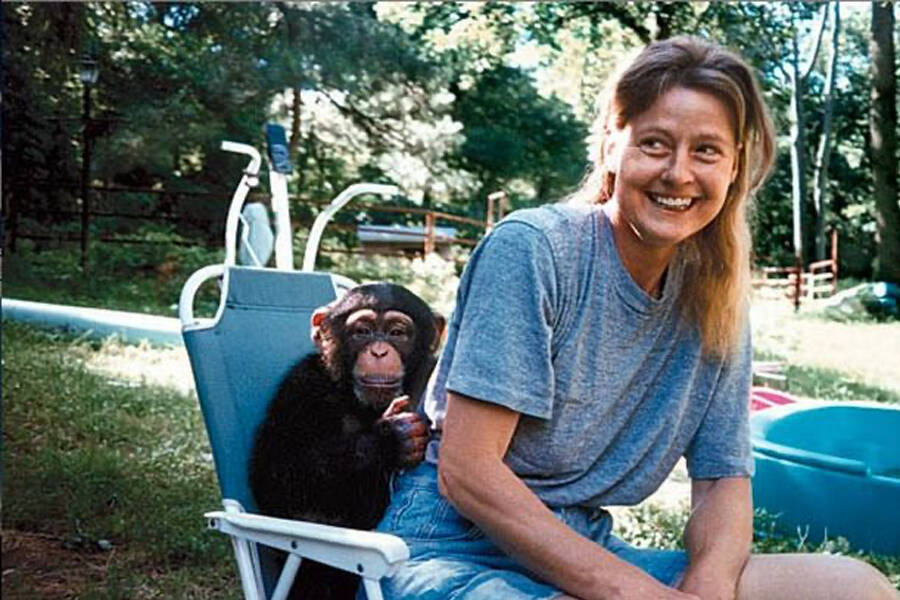 Public domainCharla Nash and Travis the chimpanzee, years before the attack as a baby.

Nash and her then 12-year-old daughter struggled to find permanent housing and stayed in a homeless shelter for over a year at one point. Nash got by at odd jobs, doing yard work, cleaning stables.

But Nash and Herold reconnected shortly after Jerry’s death, and furthermore, Herold gave Nash and his daughter a rent-free loft that had belonged to his late daughter. She also gave Nash a job managing towing expeditions and accounting.

Charla Nash also tended Herold’s lawn and watched Travis, who by then had become morbidly obese, spending most of his time snacking, watching TV, playing on the computer and browsing the house that had become a mess of unworn clothes. piled up in plastic bags and bins.

Things were clearly not going well in the Herold household, but Nash and Herold’s friendship seemed like a small beacon of light.

One weekend in February 2009, Sandra Herold and Charla Nash embarked on a rare outing, heading to the Mohegan Sun Casino in Montville, Connecticut. Herold took her friend to the salon before they left — just in case, she joked, two eligible bachelors showed up.

But when they returned on February 16, Herold came home to a very agitated Travis. While she was cleaning her room, he took his keys from the kitchen counter, unlocked the door and walked out into the yard.

For the rest of the day, he showed no interest in the things he usually enjoyed. Worried, Herold put a Xanax in his afternoon tea. 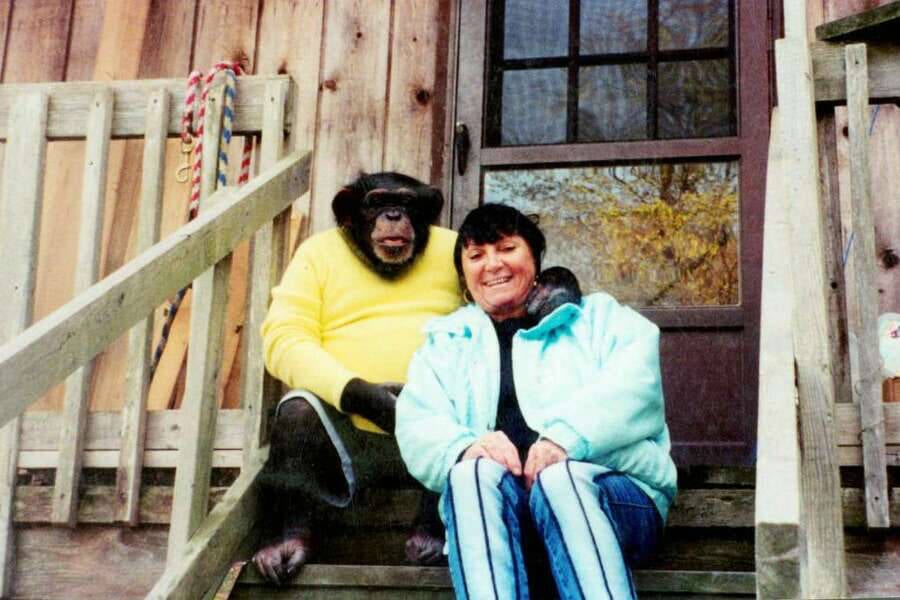 Sandra Herold/Contributing Photo/Message from ConnecticutSandra Herold and Travis the chimpanzee in 2002, when Travis was 10 years old.

Here the accounts split – Nash maintained that Herold called and asked for help getting Travis back into the house. Herold, however, said Nash offered to help.

In both cases, Charla Nash arrived at the Herolds’ home around 3:40 p.m. Travis was in the front yard. In an attempt to bring him back into the house, Nash showed him his favorite toy, a Tickle-Me-Elmo doll.

Something in Travis snapped then. He ran to Nash, stood on his own two legs and threw her to the side of his car and then to the ground. He continued to ravage the woman as she lay on the ground bleeding.

Herold started beating Travis hysterically with a shovel, but the chimp wouldn’t stop. Not knowing what else to do, she ran into his house, grabbed a butcher knife and stabbed him in the back. Yet he did not stop. She stabbed him twice more.

Travis stood up, looked his owner straight in the eye, then continued his assault on Nash.

Frantically, Herold dialed 911. “He’s killing my friend!” She screamed. “He tore it up!” Hurry up! Hurry up! Please!”

Almost incomprehensible with panic, she said to the dispatcher, “He… he ripped her face off… He’s eating her!”

The recovery life of Charla Nash

When the police arrived, they found Travis stalking the area, covered in blood. The officer fired several bullets at him and Travis, bleeding, fled into the house. A trail of blood followed its way through the kitchen and bedroom, into his bedroom where he died grabbing his bedpost.

Pieces of Nash’s body littered the yard – flesh, fingers and nearly half of his body’s blood. Travis had ripped off her eyelids, nose, jaw, lips and much of her scalp.

As the officer approached what was surely his lifeless body, she reached for his leg. Somehow, Charla Nash was still alive.

Three days after the attack, in critical condition, she was airlifted from Stamford to the clinic in Cleveland – where she will undergo 15 months of surgery.

Nine months after the attack, on Charla Nash’s 56th birthday, she revealed her face live on the Oprah Winfrey show in what is now recognized as one of the most extraordinary moments of the television.

In the years that followed, she underwent several reconstructive surgeries, including a face transplant.

“I was never a quitter,” she told Oprah before the transplant. “Unfortunately, I can’t do much… It’s very difficult to live. Not even live – half live.

Perhaps the saving grace in Nash’s story – if there has to be one – is that she doesn’t remember the attack, more than a decade later.

“I was told it could stay hidden for years, and it could eventually hit me and cause me nightmares and the like,” she said. TODAY. “If that’s the case, I can seek psychological help, but knock on wood, I don’t have nightmares or memories.”

Nash, now in her late sixties, spends her time listening to audiobooks and music, but she is still blind from the attack. She may not have lost her life, but the woman she was is almost gone – she even wears another person’s face entirely.

Still, she has remained positive about her recovery and hopes her surgeries could help soldiers who face similar disfigurements in the future.

“Don’t think about the past and what happened,” she offered as advice. “Think about where you are going to be in the future and what you want to do next. Never give up.”

After reading about the miraculous survival of Charla Nash, learn about the creepy and real cannibal attacks. Next, check out the Colorado racer who fought a mountain lion with his bare hands.

Friday Footnotes: Which company puts in the most hours? ; Customers pay for the talent war; Spotting burnout | 5.20.22